Why Government disinvesting Public Sector Units? Reasons behind it

Disinvestment in Public sector undertakings in India, is a process of public asset sales done by the President of India on behalf of the Government of India. It can be directly offered for sale to the public or indirectly done through a bidding process.

Strategic disinvestment in India has been guided by the basic economic principle that the government should not be in the business to engage itself in manufacturing/producing goods and services in sectors where competitive markets have come of age.

While track record and future of these companies were good, they have all flourished under the private sector companies that they were sold to.

So why Government disinvesting Public Sector Units? here’s the answer-

There is a separate department under the Ministry of Finance which handles all disinvestment-related works for the government. On 10 December 1999, the Department of Disinvestment was set up as a separate department and later renamed as Department of Investment and Public Asset Management. Disinvestment targets are set under each Union Budget, and every year the targets change. The government takes the final decision on whether to raise the divestment target or not.

Disinvestment has become an almost regular feature of the Union budgets under successive governments, which set a target each year to raise funds from stake sales in public sector enterprises. Disinvestment has led to mixed results for the governments in terms of meeting the revenue targets. Governments select disinvestment candidates based on various factors, such as its existing stake in the company, private sector interest in ownership of that enterprise, general market conditions, expected value realisation etc.

Main objectives of Disinvestment in India-

Thankyou! For any query mail us at: [email protected] 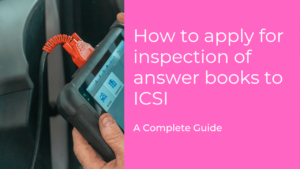 How to apply for Inspection of Answer sheet to ICSI: CS Executive & Professional

Hello dear students, in this article we’ve discussed on how to apply for Inspection of Answer sheet to ICSI. Time for application: A candidate who 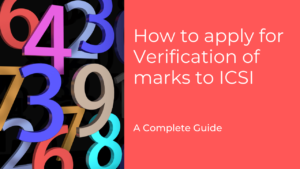 How to apply for verification of marks to ICSI

This article will help you to know the process to follow for application of verification of marks to ICSI. A candidate may apply for “Verification The ICSI has released amendment suppliments for CS Executive students appearing this December 2021 examinations. Below you can download subject wise amendment PDFs issued by 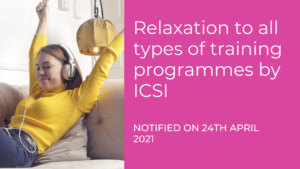 Due to recent surge of Covid 19 cases in India, the ICSI temporary relaxed all types of training programmes which are conducted in offline mode.